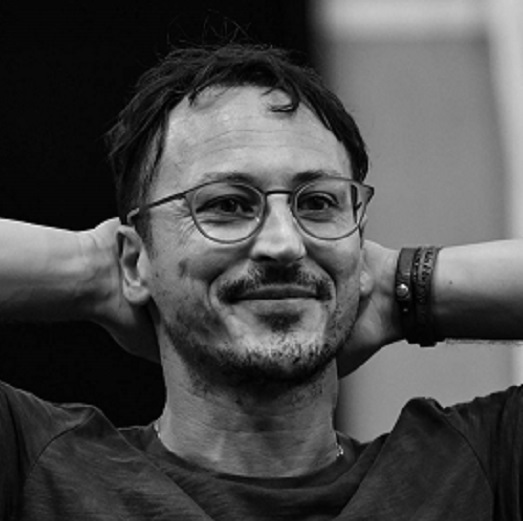 Dancer, choreographer, screen dance director, he was born in Brindisi (Italy)on January 15, 1978. From 2000 he began his professional activity as a freelancer dancer and worked with various choreographers: Nicolas Musin, Mauro Bigonzetti, Ismael Ivo, Benjamin Millepied, Micha van Hoecke, Karl Alfred Schreiner, Yaron Shamir, etc.  With his choreographies and dance video he obtains important awards and won the following, first national and international choreographic awards: in 2009, in 2009 GRANPRIX at "THE IV INTERNATIONAL SERGEI DIAGHILEV COMPETITION OF CHOREOGRAPHIC ART", with the choreography Oltre i confini (Beyond the boundaries) with the jury presided by Vladimir Malakhov;

In 2010 with the video dance IL MIO GRIDO (MY SHOUT), made with the inmates of the Rovigo City District House, he received a special mention and the award of three medals by the President emeritus of the Italian Republic Giorgio Napolitano; in Cagliari at Cortoindanza Festival in 2013 the Critics Award with the performance QUASI SORDO ... Mi piacciono i maiali (ALMOST DEAF … I like pigs) for the innovation of the choreographic language; in Belarus the Critics Award at the IFMC 2018 (International Festival Modern Choreography) in Vitebsk with the performance Viola(ta), about violence against women for their current social value; in 2018 in Graz (Austria) the "Best Film Awards" with the dance movie INTANGOUT realized with the inmates of the Brindisi city District House; the patronage of Amnesty International Italy in 2018 for the performance of contemporary dance and screen dance entitled I HAVE A DREAM, made with 7 asylum seekers of the C.A.R.A. (Reception Center for Asylum Seekers) of Brindisi, inspired by the speech by Martin Luther King.

In 2008 he began the construction of a choreographic path that sees dance develop through various arguments related to social issues such as violence against women, isolation, detention, deafness, immigration and Down Syndrome.

Since 2013 he is a member of the "National Coordination of Theatre in Prison".

From 2015 he is the director of his dance company “AlphaZTL Company of Dynamic Art” based in Brindisi (Italy), which deals with contemporary dance, video art, publishing and artistic laboratory in particular social sphere.

As a director of video art/dance his works are distributed in over 60 film and screen dance festivals throughout the world.

With the AlphaZTL produces SPAZILIBERI, a traveling exhibition of Art in the Social, which exposes through photos, installations, video dance, documentaries some of his artistic works carried out in the last ten years with the inmates of the Rovigo and Brindisi District House, with psychiatric patients REMS (Residence for the Implementation of Security Measures of Detentives), with immigrants, children with Down Syndrome. A path aimed at sensitizing the visitor: where there is knowledge, prejudices vanish.

He was a teacher at: Cheonan Dance University in South Korea; at the Modem specialization course of the company Zappalà Danza, Catania (Italy); at the "E. Ferdinando "of Mesagne, Brindisi (Italy); for the International Network and Pedagogy of Dance in Puglia (Italy); for the OCDP (Oliva Contemporary Dance Project) course, Verona (Italy); "A way of social inclusion" Art & Therapy, an Erasmus + project, Frankfurt am Main in the Künstlerinnenhaus Mousonturm and the Youth House Heideplatz.